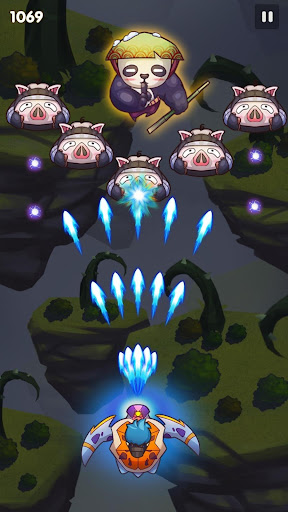 Join the sky force, riding a super cool monster to save the world from evil space invaders is a remarkable experience that can’t be found in usual space shooter nor galaxy shooter games.

Forget lifeless planes and airplanes! You will fall in love with these cute monsters in this galaxy space shooter game and fight against space invaders to save the world.

500 years ago, the evil dragon Typhragon attacked the Earth, but then repelled by the protectors of Earth, Sky Force, and sealed into soul stones. Years ago, evil invaders from another galaxy invaded the earth and unleashed the evil dragon Typhragon. Typhragon and thousands of space monsters attack, the Sky Force must stand up against this attack. Space invaders have destroyed many villages and regions. Along with powerful monsters from the Earth, Sky Force try their best to protect the Earth. Can humans resist the swarm monsters in this galaga war? You will be the one to decide! Join the Sky Force now, fend off the attack of space invaders and defend the Earth!