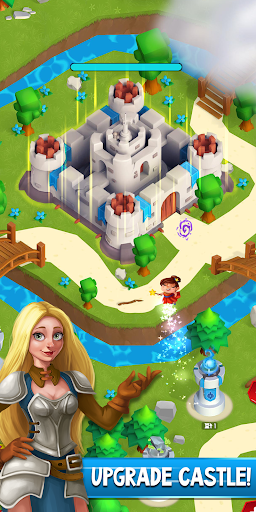 Idle Tower Defense 🔥 APK Description: Will you be able to control a kingdom and become a tower defense tycoon?

Hold the reins of the business and become rich reforming kingdoms of towers around the world.

Start running a small kingdom in a magical ocean and work hard to make your reputation grow. Improve every tower and turn your modest castle into a high-security fortress with the most dangerous frontiers under control.

Deal with the needs of your kingdom and take the proper decisions to expand your possessions with no internal conflicts. Enlarge the territory under control. Every single choice will have an impact on your kingdom. Invest your idle money intelligently.

Help your peasants to live safely. Defend them from dangerous enemies.
When people are saved – construct seaport and travel to the next amazing island in the magic ocean.

INVEST IN SCIENCE AND MAGIC:

The profit comes from defeated enemies. Make more money and make it faster. Invest in science which helps to make more money. And invest in magic for making more damage and defeat more enemies per same period of time!

Do not let the enemies destroy your castle! It is a home for many people, last frontier. Defend it as nothing else! Be brave king!

Good king always protects his peasants. When peasants are safe – move forward to meet adventures on the next amazing island of your kingdoms.

If you like management and idle games, you will enjoy Idle Tower Defense! A casual easy-to-play game where strategic decisions have to be taken to grow a tower defense empire with profitable results. Improve your empire starting from a small and modest island and unlock visible progress in your territory. Transform your small castle into the best high-security fortresses in the world and become the best king and manager around the world!
TONS OF NEW STUFF 🤩🤩🤩